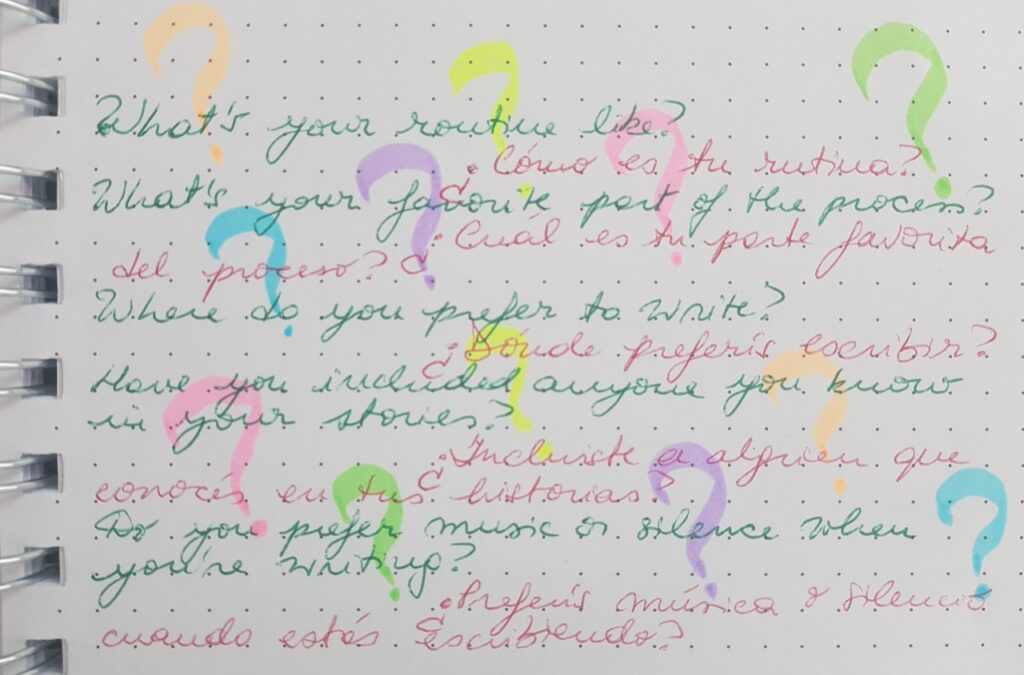 I’m not on friendly terms with mornings, so it usually takes me some time (and two cups of black coffee with loads of sweetener) to wake up. I watch the news until I’m awake enough to procrastinate until my brain commands me to grab a pen and write.

What’s your favorite part of the process?

The first time I’m drafting the plot is pretty great; I love it because I’m drawn to a story or character and there’s this pull that I can’t fight back. Also, when I’m on a roll and I lose all track of time as I’m writing.

Where do you prefer to write?

In coffee shops, surrounded by people and a buzzing energy that I drown out. I also like writing on my bed, but it’s a bit more uncomfortable and I tend to get sidetracked.

Have you included anyone you know in your stories?

No, but I do perhaps take certain traits or aspects and I mesh them with other ideas. I do pick my friends’ brains if they know of a profession or other shared interests that I want to include or refer to.

Do you prefer silence or music when you’re writing?

I prefer music, especially instrumental soundtracks or classical music, so I don’t get distracted with lyrics and I end up singing along. Absolute silence usually annoys me and ends up causing a bigger distraction; music can also be quite motivating and it sometimes helps me have a clearer idea of a character or a mood that I’m trying to portray.

Why did you use a pen name?

I was still learning the ropes. I wasn’t sure of what, exactly, I wanted to do with my writing. I knew couldn’t stop doing it, but I wasn’t certain if it was something that I really wanted to do or if it was more of a thing that was just floating around. Does that make any sense? Maybe not. I guess I was also a bit scared. What if no one liked my novels? What if they were heavily criticized? What would my family and friends think? But then I got a reader and she gave me the confidence I needed (plus, I figured, if I really wanted to make it as an author, it would be easier to have my own voice to back my work than having to create a different persona to do it).

How do you edit your work?

I usually finish writing a text and immediately try to write something else. Even if it’s a novella that’s in a different genre, a sequel, the plot of another story…And I read a novel or two (by another author), to get my mind really distracted. Once a couple of months (at least) have gone by, I get to editing. I re-read the manuscript and I’m not so close to it, in a way, so I’ve got a clearer mind, in a way. I mark typos and correct whatever grammar or punctuation issues that may come up, and I also look at the overall plot while I check for timeline consistencies. It can be a bit overwhelming but it’s also a lot of fun.

Which of the novels you’ve written is your favorite?

If I have more than one child, I won’t be able to pick a favorite. Same goes for my novels. They each have something I absolutely love (and remember clearly, even a decade or so after I’ve written them). The characters are a part of my life, I can’t pick one over another.