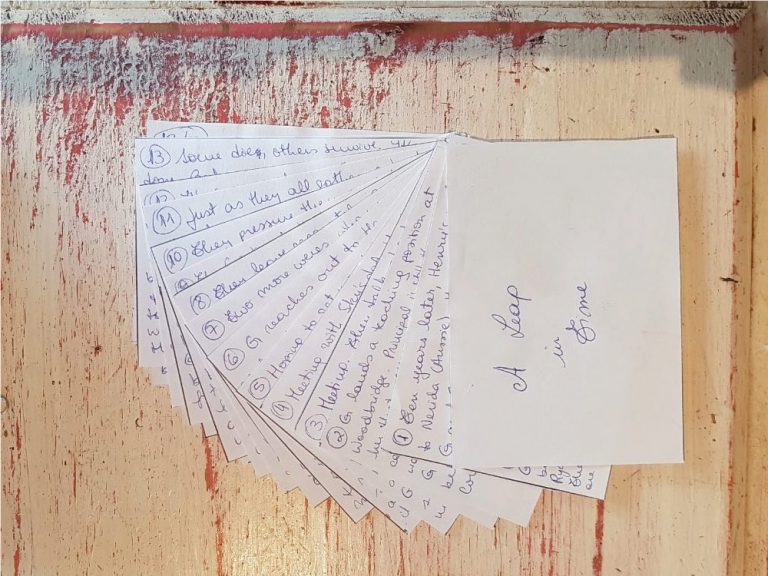 If you read the descriptions of the books I write it’s evident I don’t follow a specific genre. I write about as many topics I like to read, and that sometimes leads to me writing about teens, other times about adults, to think about stories with supernatural bits and others with more realism. And even if I’m the writer of these stories, I don’t usually make decisions about how they develop. The characters, made-up as they are, talk, even when they haven’t been written yet.

If I have to think about the specific moments in which I come up with the ideas, I can’t remember them (I’ve got a terrible memory, I have to write everything down). But generally, what I do know about my process is that, while I’m doing something (riding a bike at the gym, watching TV, listening to music, walking my dog Simona) an idea pops into my mind, like a gif, of a character doing something. And I ignore it.

Time goes by; sometimes days, other times weeks, and one of two things happens: the gif disappears never to be seen again, or it comes back stronger and with a bigger presence than before. And I can see the character in a clearer way, with more specific characteristics and a better outline. Physically I already know what they look like, maybe I even know their names. I look around them and recognize the scene they’re in. I also know something about their past, and even some of the story they’re trying to tell me.

That’s when the mapping begins. First I’ll have the character’s name, then I’ll write a physical description and personality traits (age, place of birth, what they like to do, what they don’t like to do, favorite music, favorite film or TV show, how they like to dress, etc.). I write the names of the characters who were in the gif, if there were any, and make similar descriptions. I also write the names of the places if there are institutions (such as Woodbridge or Pembridge) or the cities if I already know where the story takes place.

Then I’ll start with an outline of the story, which is no more than a paragraph or two. Once I get the sense that the story’s idea is complete, I write a guide for each of the chapters: starting with the prologue (if there is one), I summarize each chapter in four or five sentences until I reach the end. The summaries are in cards I fasten into the notebook in which I write (I can’t start from scratch on the computer, I need to write by hand first), and I write in a linear way.

My writer’s OCD is being unable to skip any chapters: if I finish 2 and don’t quite know how to begin 3, I try different ways, but I don’t go into 4 because I know 3 will be lost forever. I force myself to write it, even if it’s a little bit flimsy, because I know that I’ll re-read and edit it, even re-write it if necessary later. But even if I sometimes feel like starting the story by writing chapter 5 because I have a very clear and specific idea of what I want to happen, I can visualize it, I’m anxious to write it, I make myself wait. Otherwise I’ll be disorganized and I don’t function that way. And, when I eventually reach the point I’d been looking forward to writing, the idea is concrete and formed in my mind and it flows, unencumbered.

I write by hand and then I type everything into my computer, which means the process takes some time (afterwards I’ll print a version, I’ll let some time pass while I write something else so that the story is no longer front and center in my brain and, once I’ve forgotten a few things, I’ll re-read it looking for mistakes, inconsistencies, correcting continuity and date issues).

Another OCD I have is having to use a pen until it’s empty. I have at least 5 pens in my bag at all times, of different colors, but until I’m done using the one with which I started writing, I don’t change it. Only once I changed pens and color (!), and even if I wasn’t emotionally scarred, it’s something I’d rather avoid.

I have many notebooks, all in practical sizes to carry in my purse/backpack, most of them hardcover and all with different designs. I love them. I’m obsessed with them and whenever I walk by a stationary store I check to see if any of them are beckoning me to buy them. Needless to say, I don’t really need any at the moment, I’ve got over 10 I haven’t used yet, but they’re my weak spot. And they have to be ruled. I used plain notebooks twice and I have to admit I’m too untidy: no pages had the same amount of lines.

I love writing and, while I know each writer has their own approach to their stories, this is mine.